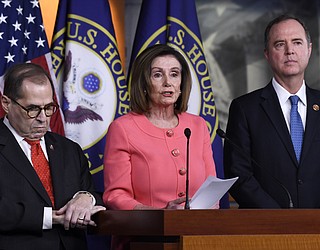 House Speaker Nancy Pelosi of Calif., center, flanked by House Judiciary Committee Chairman Rep. Jerrold Nadler, D-N.Y., left, and House Intelligence Committee Chairman Rep. Adam Schiff, D-Calif., speaks during a news conference to announce impeachment managers on Capitol Hill in Washington, Wednesday, Jan. 15, 2020. The U.S. House is set to vote Wednesday to send the articles of impeachment against President Donald Trump to the Senate for a landmark trial on whether the charges of abuse of power and obstruction of Congress are grounds for removal. (Susan Walsh/AP)

WASHINGTON — Speaker Nancy Pelosi named House prosecutors for President Donald Trump’s impeachment trial on Wednesday ahead of votes to send the charges to the Senate, even as new information about the president's Ukraine efforts intensified pressure for more witnesses.

The seven-member prosecution team will be led by the chairmen of the House impeachment proceedings, Reps. Adam Schiff of the Intelligence Committee and Jerry Nadler of the Judiciary Committee, two of Pelosi’s top lieutenants for only the third presidential impeachment in the nation’s history.

“Today is an important day,” said Pelosi, flanked by the team. “This is about the Constitution of the United States.”

The managers are a diverse group with legal, law enforcement and military courtroom experience, including Hakeem Jeffries of New York, Sylvia Garcia of Texas, Val Demings of Florida, Jason Crow of Colorado and Zoe Lofgren of California.

Ahead of Wednesday’s House vote to approve the team and transmit the articles of impeachment, Schiff released new records from Lev Parnas, an associate of Trump lawyer Rudy Giuliani, about the Ukraine strategy. including an exchange with another man about surveilling later-fired Ambassador Maria Yovanovitch.

Schiff said the new evidence should bring more pressure on Senate Majority Leader Mitch McConnell, who is reluctant to allow witnesses to testify.

"If McConnell makes this the first trial in history without witnesses, it will be exposed for what it is and that is an effort to cover up for the president,” Schiff said.