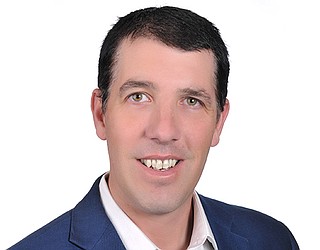 One of 30 Arizonans selected for the 2019 Flinn-Brown Civic Leadership Academy, Prescott Valley Mayor Kell Palguta joins cohort members who represent the private and public sectors in business and industry, government, nonprofits and education.

The Arizona Center for Civic Leadership at the Flinn Foundation offers the Academy to representatives from the Phoenix metro area, northern, eastern, and southern Arizona,

The competitively selected Fellows come from a wide range of backgrounds, work experiences, and political perspectives, and are expecting to pursue roles as state-level elected officials, state-agency executives, policy advisors, members of state boards or commissions, and executives in statewide organizations that affect public policy.

The Academy’s 14 interactive seminars, with a focus on policy, politics, and solutions, will begin in early February and conclude in early May. Dozens of presenters include elected and appointed officials, judges, executives, scholars, business leaders and other experts.

Topics include the state budget, K-12 and higher education, corrections, courts, water, rural and urban interests, transportation, and many other issues.

More than 350 Flinn-Brown Fellows have been selected since the start of the Flinn-Brown Academy in 2011. Together, the Fellows compose the Flinn-Brown Network, which provides long-term support, including continuing education and connection opportunities throughout the state, an annual Flinn-Brown Convention, and other activities.

“Each year we continue to be impressed with the wealth of talent and creativity among Arizonans and the desire of so many to dedicate their talents to the betterment of our state,” said Nancy Welch, director of the Arizona Center for Civic Leadership at the Flinn Foundation. “The 2019 Fellows will strengthen our Flinn-Brown Network and form relationships with other state-level leaders and those aspiring to have a significant impact on Arizona.”

Arizonans interested in learning more and applying for future cohorts can sign up for regular updates from the Arizona Center for Civic Leadership. The Flinn Foundation is a Phoenix-based private, nonprofit, grantmaking organization, founded by Dr. Robert S. Flinn and Irene P. Flinn in 1965 with the mission, “To improve the quality of life in Arizona to benefit future generations.” Along with the Arizona Center for Civic Leadership, the Foundation supports the advancement of Arizona’s bioscience sector, the Flinn Scholars Program, and Arizona arts and culture organizations.