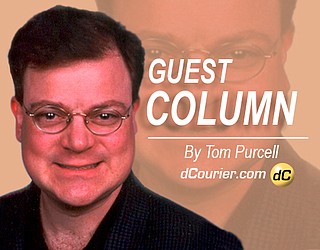 “I can’t take it anymore! My social media friends are driving me batty!”

“Ah, yes, you speak of a recent Pew Research Center survey that found ‘46% of adult social media users say they feel ‘worn out by political posts and discussions they see on social media’ — a share that ‘has risen 9 percentage points since the summer of 2016, when the Center last asked this question.’”

“I sure am worn out. Half of my online friends hate one political party, half of them hate the other. Personally, I’ve come to dislike both parties!”

“It’s becoming regrettably unusual for anyone to have online friends who hold differing views, which is an awful shame.”

“You want shame? Post anything, positive or negative, about President Trump or Bernie Sanders and see what happens. Whatever happened to decorum?”

“It’s being replaced by growing intolerance of differing viewpoints. The Aspen Institute explains why: Our technologies make us more connected to each other than at any time in history. We learn news as it breaks and can instantly message thousands of people at once.”

“Like what I had for breakfast? Even our grub has become divisive! A little hint: Don’t share your love of bacon online unless your safe house is ready!”

“Aspen rightly points out that our incredible new tools should help us build bridges and discuss new, different ideas with new people everywhere to strengthen and improve our social fabric, but the reverse is happening. These tools are encouraging us to connect with like-minded people and ‘unfriend’ everyone else.”

“Maybe so, but there are exceptions. I ‘friended’ a group of fellow beer lovers on Facebook. We get together every Friday to share homemade brews. Half are Republicans and half are Democrats, but we never argue.”

“Not when you burp as often as we do!”

“The Pew survey has findings across major demographic groups. It says white social media users (52%) are grumpier about political posts than nonwhite users (36%).”

“I’d try to say something witty here, but half of my friends would hate it, half would like it, and I’d have to go incognito to reach my safe house.”

“Further, says Pew, ‘Republicans and Republican-leaning independents are somewhat more likely than Democrats and Democratic leaners to say they are worn out by the political posts they encounter on social media (51% vs. 43%).”

“I’d try to say something witty here, too, but I’d have to go incognito to reach my safe house.”

“A key takeaway from the survey is that all social media users are ‘more likely today than in the past to describe the political discourse on these platforms in negative terms.’”

“Thank goodness some people still have a sense of humor online. Like whoever did that post with an elderly gentleman in a chair who says, ‘Life is short. Make sure you spend it arguing politics with strangers on the internet.’”

“That’s funny! Look, most reasonable people agree we are misusing our technologies, making us more tribal and insular, not less. That’s why our discourse has reached a fever pitch. But we need reason and clear-headed discussions to address growing challenges. Otherwise, we will continue to shred the fabric of our civilization. We must do better.”

“You’re right. But everybody else is going to have to brew more beer. No way can our little group brew enough to bring the whole internet together!”

Tom Purcell, author of “Misadventures of a 1970’s Childhood,” a humorous memoir available at amazon.com, is a humor columnist. Send comments to Tom at Tom@TomPurcell.com.