Howard: Montreal to Rafa Nadal, Toronto to Bianca Andreescu; now on to Cincinnati 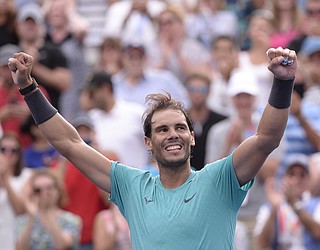 It was an unusual couple final matches at the Canadian Open, first in Toronto where 19-year-old Canadian Bianca Andreescu won the title from Serena Williams after a 3-1 lead in the first set and Williams retiring from the match. The problem was a muscle spasming upper back that started in Serena’s previous semi-final match.

Bianca, who earlier this year won the Indian Wells Championships in California, is the first Canadian to win the Toronto tournament in 50 years.  The bubbly teenager said she was “really, really happy” and dedicated this tournament win to her parents. She added she hopes this will give tennis in Canada a bigger push.

About 360 miles away in Montreal, Rafa Nadal of Spain defeated 23-year-old Russian Daniil Medvedev in a short 70-minute final, 6-3, 6-0. Nadal has now won 35 masters titles and 83 ATP singles titles in his career.

Unfortunately for the Cincinnati fans, they will not get to see either of these champs this week at the Western & Southern Open held in Mason, Ohio, because they withdrew shortly after their final matches in Canada.

Nadal cited fatigue, even though he had an easy finals match and a walk-over in the semi’s, while Bianca just said it was a schedule change. She has been somewhat plagued with a shoulder, back and, at this tournament, slight groin pull (in Toronto) that probably needs rest before the important last Grand Slam — the U.S. Open, beginning Aug. 27.

The Western & Southern Open in Cincinnati is shaping up to be an explosion of talent with the ATP top seeds of Novak Djokovic, now at his 262nd week at No. 1, Roger Federer, Dominic Thiem, and No. 4 Stefanos Tsitsipas.

Add in the interesting wild card of Andy Murray, who will be playing against Frenchman Richard Gasquet in his first tournament back in singles after having hip surgery.

On the women’s side, 23-year-old Ashleigh Barty holds the No. 1 seed, followed by Naomi Osaka, Karolina Pliskova and Simmona Halep.

Will Serena Williams’ back settle down enough to stay in the draw? The next 24 hours or so will give us the “Rest of the Story” on that count.

Wild cards have been given to Maria Sharapova and Svetlana Kuznetsova, who are well-known past champions, trying to hang on and grab another title before retiring.

From now through the 18th of August, play takes place at the up-graded Lindner Family Tennis Center where the draws are made up of 56-player fields of singles and 32 teams of doubles.

This is the last big tournament to ready for the U.S. Open against the best players in the world, and most are trying hard to go into it with some good match/wins. Keep an eye on the Tennis Channel because that’s where the majority of the coverage will take place as the “March to the U.S. Open Series” goes into its final couple weeks.

Personally, on the men’s tour I’d love to see Roger, Rafa and Novak all lose at the Open in the first round and have some new blood fight for the title. That’s rather unlikely.

And for the women, it’s been open season for a while now — many new faces with great games. Will one of these ladies reach a point of domination like the Williams sisters (Venus and Serena) have done for nearly 20 years?

What makes a player reach a level of domination? Well, that’s another column.

Chris Howard is a local USPTA Tennis Professional with over 40 years in the racquet and fitness industry.  He can be reached at 928-642-6775 or choward4541@gmail.com.