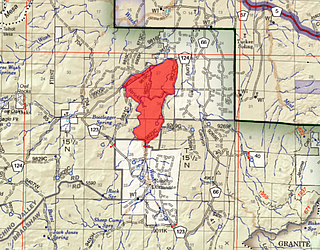 The perimeter of the Pemberton Fire, which is burning 13 miles northwest of Prescott in the Chino Valley Ranger District. (Prescott National Forest/Courtesy)

Three lightning-started fires continue to burn to some degree on the Chino Valley Ranger District.

Of the three (Pemberton, Sheridan and Stinson), the Pemberton Fire has been receiving the most attention from fire officials.

“[The Pemberton Fire] has a little bit better access for us to be able to work on, as opposed to the Sheridan and Stinson fires, which are in a little more remote areas,” said Ansgar Mitchell, public information officer with the Prescott National Forest (PNF).

Located 13 miles northwest of Prescott, the 143-acre Pemberton Fire is burning in Pinyon-Juniper, grass and brush. It began on Aug. 6 and is zero-percent contained. Resources assigned to the fire include five engines, one crew and one helicopter.

On Monday, firefighters patrolled and monitored control lines. If weather conditions remain favorable, they plan to continue with firing operations along Fair Oaks Road throughout the next several days.

“Due to smoke impacts, we ask that while traveling on the roads around and near the fire area to use caution for public and firefighter safety,” said Debbie Maneely, a spokesperson with the PNF.

Maneely warned that Prescott drivers may experience delays on Fair Oaks Road because of fire traffic and firefighters working along the roadway.

Temporary Flight Restrictions (TFR) have been placed over the Pemberton and Sheridan fires to provide a safe environment for firefighting aircraft being used for aerial operations, Maneely said.

Fire officials said they are continuing to monitor the Sheridan and Stinson fires via aircraft, but have not begun to take any suppression actions on either.

“Right now our focus is more on the Pemberton, but that may shift in the coming days,” Mitchell said.

The Sheridan Fire was detected on Aug. 5 burning in Juniper, grass, and brush near Sheridan Mountain on Cedar Mesa. Its estimated size on Aug. 6 was 15 acres.

The Stinson Fire was detected Aug. 6. At the time, it consisted of a single tree burning on the west side of Stinson Mountain in the Stubbs Fire scar from last year.

Mitchell said there are no updated estimated sizes of the Sheridan and Stinson fires at this time.