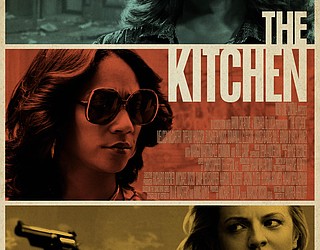 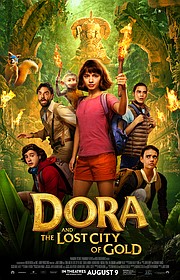 (NEW) DORA AND THE LOST CITY OF GOLD

(NEW) DORA AND THE LOST CITY OF GOLD - Having spent most of her life exploring the jungle, nothing could prepare Dora for her most dangerous adventure yet -- high school. Accompanied by a ragtag group of teens and Boots the monkey, Dora embarks on a quest to save her parents while trying to solve the seemingly impossible mystery behind a lost Incan civilization. Stars Isabela Moner, Eugenio Derbez, Michael Peña, Eva Longoria, Danny Trejo. PG – action, adventure

(NEW) SCARY STORIES TO TELL IN THE DARK - The shadow of the Bellows family has loomed large in the small town of Mill Valley for generations. It's in a mansion that young Sarah Bellows turns her tortured life and horrible secrets into a series of scary stories. These terrifying tales soon have a way of becoming all too real for a group of unsuspecting teens who stumble upon Sarah's spooky home. Stars Zoe Colletti, Michael Garza, Gabriel Rush, Austin Abrams, Dean Norris, Gil Bellows, Lorraine Toussaint. PG-13 – thriller, horror 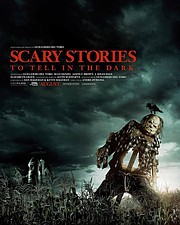 (NEW) SCARY STORIES TO TELL IN THE DARK

FAST & FURIOUS PRESENTS: HOBBS & SHAW - Ever since hulking lawman Hobbs, a loyal agent of America's Diplomatic Security Service, and lawless outcast Shaw, a former British military elite operative, first faced off in 2015’s Furious 7, the duo have swapped smack talk and body blows as they’ve tried to take each other down. But when cyber-genetically enhanced anarchist Brixton gains control of an insidious bio-threat that could alter humanity forever — and bests a brilliant and fearless rogue MI6 agent, who just happens to be Shaw’s sister — these two sworn enemies will have to partner up to bring down the only guy who might be badder than themselves. Stars Dwayne Johnson, Jason Statham, Idris Elba, Vanessa Kirby, Helen Mirren. PG-13 – mystery, action.

ONCE UPON A TIME … IN HOLLYWOOD - Quentin Tarantino’s Once Upon a Time... in Hollywood visits 1969 Los Angeles, where everything is changing, as TV star Rick Dalton and his longtime stunt double Cliff Booth make their way around an industry they hardly recognize anymore. The ninth film from the writer-director features a large ensemble cast and multiple storylines in a tribute to the final moments of Hollywood’s golden age. Stars Leonardo DiCaprio, Brad Pitt, Margot Robbie, Emile Hirsch, Margaret Qualley, Timothy Olyphant, Austin Butler, Dakota Fanning, Bruce Dern, Al Pacino. R – drama, thriller

THE ART OF SELF-DEFENSE – After getting attacked on the street, Casey enlists in a local dojo that's led by a charismatic and mysterious sensei. He soon uncovers a sinister fraternity of violence and masculinity while learning how to defend himself. Casey must now embark on a dark and frightening journey that places him squarely in the sights of his enigmatic new mentor. Stars Jesse Eisenberg, Alessandro Nivola, Imogen Poots. R - comedy

CRAWL – When a massive hurricane hits her Florida town, young Haley ignores the evacuation orders to search for her missing father, Dave. After finding him gravely injured in their family home, the two of them become trapped by the rapidly encroaching floodwaters. With the storm strengthening, Haley and Dave discover an even greater threat than the rising water level -- a relentless attack from a pack of gigantic alligators. Stars Kaya Scodelario, Barry Pepper. R – drama, thriller

ECHO IN THE CANYON – A look at how musical groups such as The Byrds, The Beach Boys, Buffalo Springfield, and The Mamas & the Papas birthed the beginnings of the Laurel Canyon music scene and how the echo of these artists' creations reverberated across the world. PG-13 – documentary

THE LION KING - Simba idolizes his father, King Mufasa, and takes to heart his own royal destiny on the plains of Africa. But not everyone in the kingdom celebrates the new cub's arrival. Scar, Mufasa's brother -- and former heir to the throne -- has plans of his own. The battle for Pride Rock is soon ravaged with betrayal, tragedy and drama, ultimately resulting in Simba's exile. Now, with help from a curious pair of newfound friends, Simba must figure out how to grow up and take back what is rightfully his. Stars Donald Glover, Seth Rogen, Chiwetel Ejiofor, Alfre Woodard, Billy Eichner, John Kani, John Oliver, Beyoncé Knowles-Carter, James Earl Jones. PG – drama, adventure

STUBER - When a mild-mannered Uber driver named Stu picks up a passenger who turns out to be a cop hot on the trail of a brutal killer, he’s thrust into a harrowing ordeal where he desperately tries to hold onto his wits, his life and his five-star rating. Stars Kumail Nanjiani, Dave Bautista, Iko Uwais, Natalie Morales, Betty Gilpin, Jimmy Tatro, Mira Sorvino, Karen Gillan. R – action, comedy

YESTERDAY – Jack Malik is a struggling singer-songwriter in an English seaside town whose dreams of fame are rapidly fading, despite the fierce devotion and support of his childhood best friend, Ellie. After a freak bus accident during a mysterious global blackout, Jack wakes up to discover that The Beatles have never existed. Performing songs by the greatest band in history to a world that has never heard them, Jack becomes on overnight sensation with a little help from his agent. Stars Himesh Patel, Lily James, Ed Sheeran, Kate McKinnon. PG-13 – fantasy, romance.

TOY STORY 4 – Woody, Buzz Lightyear and the rest of the gang embark on a road trip with Bonnie and a new toy named Forky. The adventurous journey turns into an unexpected reunion as Woody's slight detour leads him to his long-lost friend Bo Peep. As Woody and Bo discuss the old days, they soon start to realize that they're worlds apart when it comes to what they want from life as a toy. Stars Tom Hanks, Tim Allen, Annie Potts, Tony Hale, Keegan-Michael Key, Jordan Peele, Madeleine McGraw, Christina Hendricks, Keanu Reeves, Ally Maki, Jay Hernandez, Lori Alan, Joan Cusack. G – fantasy, adventure.

PENGUINS – An Adélie penguin named Steve joins millions of fellow males in the icy Antarctic spring on a quest to build a suitable nest, find a life partner and start a family. None of it comes easily for him, especially considering he's targeted by everything from killer whales to leopard seals, who unapologetically threaten his happily ever after. Stars Steve the Adélie penguin. G – documentary.