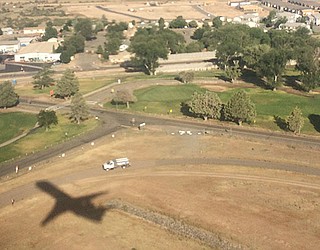 A United Express airplane takes off July 27 from the Prescott Airport. (Tim Wiederaenders/Courier)

• TAX ME HOW MUCH? — Every time a tax increase is proposed, we at the Courier hear from two different camps — those who look at it as a glass half-full scenario, and those who are what I refer to as doomsday-ers (looking only at the biggest number).

Take for example the Yavapai County property tax increase to pay down pension debt and to begin the new justice and jail center on Prescott Lakes Parkway — for which a tax rate was approved by the Board of Supervisors on Aug. 5.

Of course, the 3% will be accurate only if other taxing entities, such as school district, flood control, fire district, college district, etc., do not increase their portions. If they do, then the entire bill will increase accordingly.

It is all a matter of context, and you need to understand the entire issue to see the details.

That became clear for everyone who attended the county’s Aug. 5 Truth in Taxation hearing. If this is foggy at all for you, call County Administrator Phil Bourdon at 928-771-3200. He would love to hear from you.

• FRIENDLY SKIES — I returned to work this week after driving across the country in a rented truck. My sister and I were on the East Coast helping Dad, and the return trip spanned nearly 2,500 miles across 10 states.

While that had its challenges (the crosswinds in western Kansas forced dangerous, unplanned lane changes!), the greatest pleasure of the nine-day trip was flying out of the Prescott Airport to Denver International for the connecting flight. The service was perfect and on time, and did not require a drive to or the expense of Phoenix to begin the trip.

To know that Love Field is among the top 50 busiest in the nation — partly because of Embry-Riddle Aeronautical University student traffic — and that enplanements are on pace to exceed 25,000 passengers this year, the reason can be found in the fact that we finally have exceptional Essential Air Service through United Express/SkyWest Airlines.

It took several years and different carriers. But Prescott has a gem there now.

To quote Shakespeare, “Though (our airport) be but little, he is fierce.”

You have certainly seen them, flashing how you are doing compared to the posted limit.

I see it as a game — (1.) to see whether it “sees” me, and how my number compares to my truck’s speedometer, and (2.) how the surrounding vehicles compare; who has the highest number.

Unfortunately, after witnessing someone doing 55 in a 35, a quick look around shows no law enforcement. That’s some sort of Murphy’s Law, isn’t it?

• QUOTE — “A lot of lip service gets paid to being honest, but no one really wants to hear it unless what’s being said is the party line.” — Colin Quinn

• PICK OF THE WEEK — (Proving there’s always something good to do in the Prescott area that’s cheap or free): The Mile High Brewfest, from 4 to 8 p.m. Saturday, Aug. 10, at the Prescott Mile High Middle School field. More than 25 brewers will be there, and proceeds benefit the Boys & Girls Club of Central Arizona.

Tim Wiederaenders is the senior news editor for the Prescott News Network. Follow him on Twitter @TWieds_editor. Reach him at 928-445-3333, ext. 2032, or twieds@prescottaz.com.

Editor's Note - this column has been updated to correct the date that the Board of Supervisors approved the tax rate.