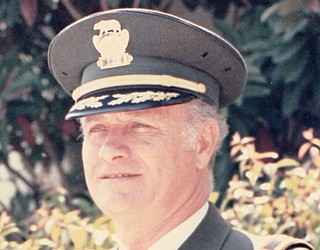 Oliver Taylor, affectionately known to everyone as Ollie, passed away on January 31, 2020 in Prescott, Arizona and is in Heaven, with our Lord, along with an older brother and four sisters. Ollie was born on January 11, 1936 in Los Angeles, Calif., to Helen and David Taylor. He grew up in San Pedro, Calif. and graduated from San Pedro High School in 1953. He received his A.A. Degree in Criminal Justice from East Los Angeles College and his B.A. Degree in Public Administration from Pepperdine College in California. Ollie is also a graduate of the FBI National Academy in Quantico, Virginia. Ollie served in the United States Naval Reserves for 10 years.

Ollie joined the Los Angeles County Sheriff’s Department in 1959, where he met a young secretary named Carolyn Sue Howe. Ollie and Carolyn were married on May 25, 1968. They were married almost 52 years.

During Ollie’s 32-year career in law enforcement, he worked numerous assignments and attained the rank of Division Chief, prior to his retirement, in 1991.

Ollie retired as Chief of Detective Division and Ollie was loved and respected by all those who worked with him. He always had time to mentor young people and law enforcement officers, who sought his advise and counsel. After retiring, Ollie and Carolyn moved to Prescott.

Ollie joined the Prescott Noon Lions in 1998 and was appointed chairman of the Sight and Hearing Committee. Ollie received the Melvin Jones Fellow Award for dedicated humanitarian services from the Lions Club International Foundation. Ollie was also a member of the Elks Lodge, Aztlan Lodge of the Masons and the Fraternal Order of Police.

During his life, Ollie loved fishing and hunting with friends, traveling all over the world, photography, reading and politics. Ollie is survived by his wife, Carolyn; daughter, Tami and son-in-law, Mitch Shlosser; daughter, Nanette and son-in-law, Mitch Shapiro; sister, June Brown; grandchildren, Erica and husband, Aaron, Ashley, Ian and Rayah; two great-granddaughters, Mircea and Tirza and several nieces and nephews, whom he dearly loved.

The family came to Prescott to celebrate Ollie’s 84th birthday in January, 2020, which he really enjoyed.

Ollie was cremated and a Celebration of Life will be announced at a later date.