State Roundup: Bears edge Scorpions via PKs in play-in round 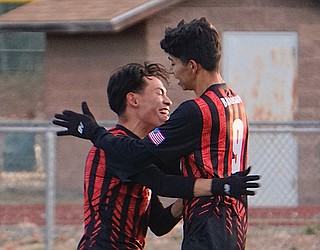 Bradshaw Mountain boys soccer topped Desert Edge 5-4 in penalty kicks during a wild and intense state play-in match on Thursday. Dillon Harwood and Moises Carreno notched one a goal apiece to keep the Bears in the game. With the score knotted 2-2 at the end of extra time, it was Bears goalkeeper Shane Workman that saved the day during the penalty-kick round. Not only did he bury the go-ahead penalty, he blocked Desert Edge’s rebuttal right after to secure Bradshaw Mountain’s ticket to the first round of state on Saturday. That game will be on the road.

Tempe snuck past Prescott boys soccer in a state play-in round match Thursday night. The Badgers were unable to replicate their state finals run from last season and ended this season with a 7-7-1 record during the regular season.

Salpointe Catholic proved to be too much to handle during a 60-31 routing of Bradshaw Mountain girls basketball in a state play-in game Thursday night. The Bears’ offense just couldn’t get going but Peyton Bradshaw still put up seven points while Sierra Woolley and Kendall Newton contributed six points each. The Bears finished their season with a 12-15 overall record.

Bradshaw Mountain girls soccer struggled to slow down a polished Seton Catholic team in a 2-0, season-ending loss during their state play-in match on Thursday. The banged-up Bears were shorthanded coming into the game due to a slew of in injuries and only had 12 players available. However, the Bears battled in the first half and went into the break even with Seton Catholic 0-0. But then, midfielder Bria Coleman went down with a concussion and the Bears couldn’t hold on any longer, eventually losing 2-0. Bradshaw Mountain finished the regular season with a 6-7 record.