Friday Catchall: Campbell has noble cause; we’re on sleep list! 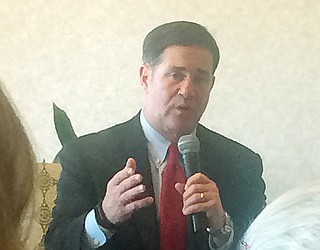 • TAXES – To hear Gov. Doug Ducey tell it Thursday, Feb. 13, the state is in fine shape financially: We have paid off our debts; are working to fix others — such as the Public Safety Personnel Retirement System (PSPRS) unfunded liabilities; now own the state Capitol building, again; we’re funding education better and better; and will spend $4.6 billion on roads and infrastructure over the next five years.

And, “As I have said in two inaugurals and five State of the State speeches,” he said, “we are not raising taxes on my watch.”

Ducey adds he is not seeking re-election — his term ends in 2022 and he is term-limited; basically, he has nothing to lose.

Then there’s Rep. Noel Campbell, R-Prescott, who is not seeking re-election. Frankly, he has nothing to lose either.

Campbell wants the state to modernize the gasoline tax. A portion of what you pay at the pump goes toward state road maintenance; the current 18-cent-a-gallon levy was set in 1991. Accounting for inflation since then, the effective tax rate is worth only 9 cents.

Counties exist in Arizona that need $1 billion each to bring their roads and bridges up to standards. The current gas tax is not enough.

Even some cities and towns are struggling. For instance, Chino Valley to the north of us has 153 miles of existing roads, and voters turned the town down for a road tax. They’ve also seen Highway User Revenue Funds (HURF) swept away by the state; that’s money the town needed for maintenance (think: fixing potholes, at least).

Campbell says the situation is dire and, in response to Ducey’s mantra of not raising taxes, he says: “But I have to try.”

I will think of this the next time I run over a pothole or have to replace a shock absorber on my truck.

Prescott and other municipalities here have been touted as the best place to retire, best downtown, best this – best that. We also rank as best place to fall asleep.

“We’ve all experienced trouble sleeping at night due to various factors. It could be that your neighborhood is particularly noisy these days or that you simply work late and can’t seem to shut down your mind for the night. If you have ever wondered whether your neighbors are soundly asleep or suffering the same sort of sleeplessness, you will be interested to find out that the same factors influencing your sleep habits may be affecting other residents in your town too!”

Wow. I thought it would have been about stress and the coyote den near my house.

• QUOTE – “Try and fail, but don’t fail to try.” – Stephen Kaggwa of the World Health Organization.

• PICK OF THE WEEK – (Proving there’s always something good to do in the Prescott area that’s cheap or free): “Chiles & Chocolate: Sweet & Spicy Foods in the American Southwest,” at 1 p.m. Saturday, Feb. 15, at the Phippen Museum, 4701 N. Highway 89.

Tim Wiederaenders is the senior news editor for the Prescott News Network. Follow him on Twitter @TWieds_editor. Reach him at 928-445-3333, ext. 2032, or twieds@prescottaz.com.