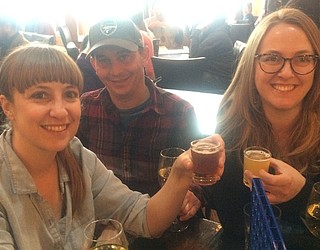 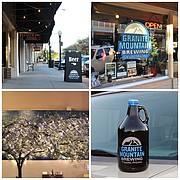 Last year, organizers were testing the waters because they weren’t sure what the response would be for this type of event because it is a niche interest group, said Hawk & Hound Director of Sales and Events Vanessa Evans. Instead of being a typical beer crawl where participants just go and drink whatever they want, this one has a focus on craft beer, Evans said.

They hoped to get 100 people and wound up attracting three times that amount, Evans said. This year, the hope is to get at least 400, and it would be great to double last year’s turnout and have 600 people, she said.

What worked well for last year was not requiring people to get a stamp at each location, Evans said. Instead, they checked in at the Barley Hound, got a map to show which places were participating and were under no pressure to rush through each place, she said. Participants also received pretzel necklaces, which were a huge hit and are returning, Evans said. Beanies were given out as well but because more tickets were sold than anticipated, they ran out, she said. This year, the Beanie will be given with the first 400 tickets sold.

General admission for the second annual Northern Arizona Craft Beer Crawl on Saturday, Feb. 15, is $20 in advance and $30 the day of and includes an eight-ounce commemorative sampler cup, an exclusive price of $2 per beer at each participating location, the pretzel necklace and the commemorative beanie with the logo and year if it’s one of the first 400 tickets. It starts at 11 a.m.

Since the Northern Arizona Beer Crawl is a straightforward event without too many moving pieces, Evans said she enjoys being able to see everyone else get to have a good time. The locals get to enjoy being downtown and possibly checking out a new bar, such as the recently opened Montezuma Tavern, and people coming from out of town get to discover how cool Prescott is, she said. They all get to appreciate locally made craft beer as well, Evans said.

“Anything locally made, I just am a big fan of,” she said. “Whether it’s beer, wine or clothes or whatever the case may be.”