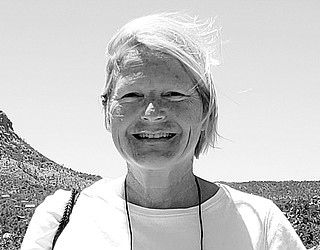 Ricky Erway, 62, resident of Prescott, Arizona, died suddenly and accidentally in New Orleans on January 25, 2020. Ricky was born on Christmas Eve in Madison, Wis., to Norm and Willie Erway.

After her 1976 high school graduation in Oregon, Wis., she earned her Bachelor’s degree in English and Education from UW-Stevens Point and later earned a Masters of Library Science from UW-Madison. Following graduate school, she went to work for the Library of Congress in Washington DC. She eventually served as the associate coordinator of American Memory, an initiative aimed at significantly increasing public access to the special collections of the Library of Congress.

During her time, Ricky had the opportunity to present the concepts and results of the program to such luminaries as the Queen of England and Al Gore, who was, at the time, the Vice President of the United States.

She later moved the Palo Alto, Calif., as the Digital Resources Manager at RLG, a global collaborative of research libraries working cooperatively to preserve and provide access to their culturally rich collections.

When RLG merged with the Online Computer Library Center (OCLC) in 2006, Ricky became a senior program officer in OCLC Research, where she continued her work until her retirement. Her work was important and in addition to all the people she touched personally, she impacted librarians across the world with her ideas and writings.

Following her retirement, Ricky and her husband, Ted Brooks took off on an RV journey across the US, ultimately visiting 37 states in their quest to find a new home. They settled in Prescott, where Ricky directed her activities towards volunteering at the Archives of the Sharlot Hall Museum and continued traveling with a concentration on her new home state and the general Southwest. She also wrote and published articles about Prescott’s past in the Daily Courier’s “Days Past”. Ricky was loved by all who knew her. With a sharp wit, a wry sense of humor, accompanied by a laugh that lit up the room, a love for life, for games, for traveling and especially for her family and friends, Ricky was a joy to be around and was loved by all who knew her.

Ricky is survived by her husband Ted Brooks; her sisters, Tracy Erway Burton of Madison, Wis., Kim Erway Birck (William) of Missoula,Mont.; her step daughter, Molly Brooks of Brooklyn, NY and her niece Korrigan Kate Burton of Chicago, Ill. Donations may be sent to the Sharlot Hall Museum in Prescott.