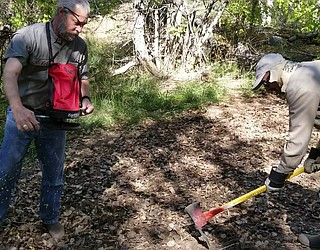 One man’s weed is another man’s treasure.

Take cottonwoods, for example. To irrigation farmers in places like Phoenix, cottonwoods may be perceived as a nuisance due to the tree’s great use of water.

But in the eyes of Prescott Creeks, a nonprofit that strives to achieve healthy watersheds and clean waters in central Arizona for the benefit of people and wildlife, cottonwoods are a welcomed companion.

“Our belief is that if you have a good, healthy cottonwood system, then you’re going to have overall more moisture in the system,” said Michael Byrd, executive director of Prescott Creeks.

Byrd explained that cottonwoods keep water in the banks of the creeks with their roots. The trees also transpire moisture through their leaves and provide shade, creating a more humid environment.

Even more significant, though, is cottonwoods are native to central Arizona and hospitably share the land with other native plant species.

This is not the case for plants like spotted knapweed and common teasel, two non-native species that Prescott Creeks has been struggling to control the spread of. 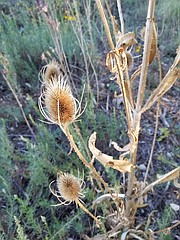 Common teasel found in Watson Woods. The non-native plant is considered a noxious weed in the wildlands of Central Arizona. (Max Efrein/Courier)

“It has a very invasive growth habit,” Byrd said of common teasel. “It really degrades diversity in the ecosystem.”

A recently-identified invader of the Watson Woods Riparian Preserve is periwinkle, or Vinca major. The non-native plant was first observed in the woods surrounding Watson Lake in 2016. It has since cropped up in thick patches.

It’s unclear how the plant was introduced into Watson Woods, but Byrd has his suspicions.

“It probably started out in somebody’s yard and made its way here somehow,” he said.

Unlike teasel, which is a relatively unattractive plant covered in sharp thorns, Vinca is a low-growing plant with soft features and colorful flowers, so it’s sometimes seen as a desirable landscape plant around homes and businesses.

However, once Vinca establishes itself in wild habitats, it can cause serious ecological issues, Byrd said. The plant tends to form a dense cover that prevents growth and establishment of other plant species, thereby lowering species diversity and disrupting native plant communities.

Combatting the spread of plants like Vinca into wild habitats is a difficult task. One tactic Byrd believes is effective is education.

“We can educate people about why these plants are kind of a mess for natural ecosystems, and maybe folks would pull them out of their yards,” he said.

As with many organizations and government entities that work to protect the wildlands, Prescott Creeks maintains a short list of noxious weeds it is actively working to control the growth of in Watson Woods. On that list is the following:

John Mangimeli has been volunteering with Prescott Creeks to help manage such weeds in local wild habitats for about 10 years.

He spends hours every week manually pulling these plants out of the ground along local watersheds. 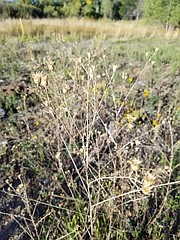 Spotted knapweed in Watson Woods. The non-native plant is considered a noxious weed in the wildlands of Central Arizona. (Max Efrein/Courier)

For additional information about non-native plants and how you can make a difference, contact Prescott Creeks by emailing info@PrescottCreeks.org or calling 928-445-5669.